Recent reports have suggested that even short, transient activation of the Yamanaka factors is sufficient to reverse some aspects of cellular aging (Ocampo et. al. 2016, Sarkar et. al. 2020, Lu et. al. 2020, Gill et. al.). These exciting results prompt several questions: What features of aging are reversed? Does partial reprogramming exert similar effects across different cell types? Which aspects of the pluripotency program are required for rejuvenation?

Here, we interrogated these questions by mapping trajectories of partial reprogramming in multiple cell types using single cell genomics. We further measured the effect of partial reprogramming with all possible combinations of the Yamanaka factor set using pooled screening approaches. Inspired by limb regeneration in amphibians, we also explored whether partial multipotent reprogramming could restore youthful expression in myogenic cells. 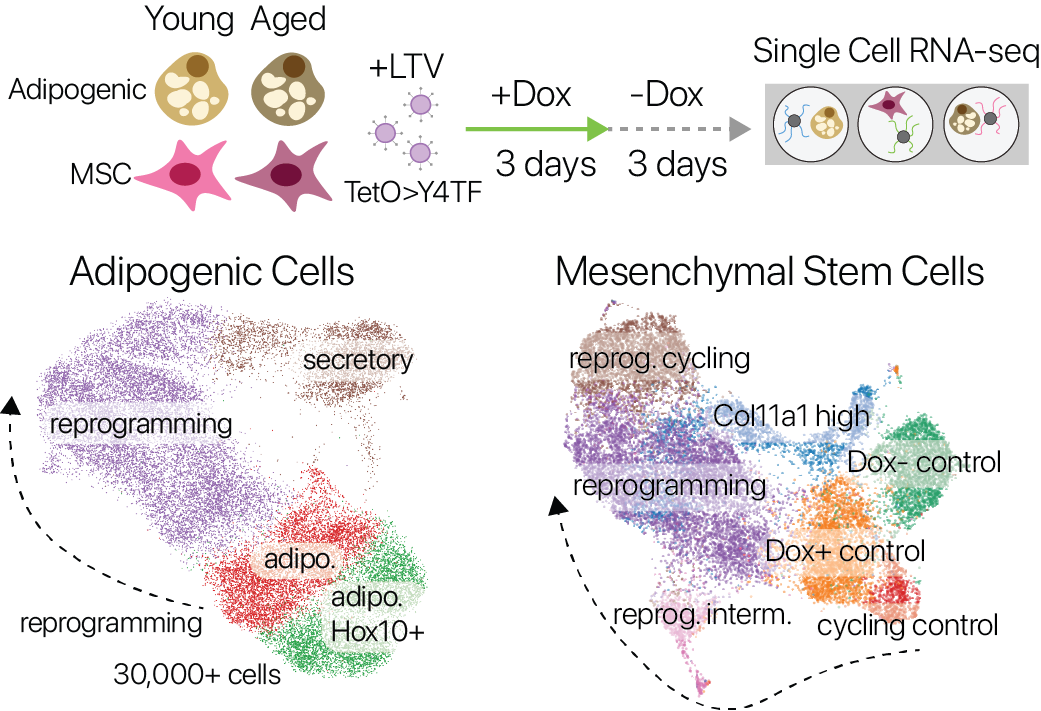 Single cell expression profiles in both adipogenic cells and MSCs revealed a continuous trajectory of cell states induced by partial reprogramming. We also profiled control cells that were not reprogrammed, allowing us to compare the effects of aging and reprogramming in a common measurement space.

We first wondered if partial reprogramming reversed some features of aging. To investigate, we used maximum mean discrepancy (MMD) comparisons between young and aged cells before and after treatment, considering features across the transcriptome. Remarkably, we found that adipogenic cells were more similar to young controls after treatment, with youthful expression levels restored in thousands of genes. In MSCs, we found that fibrotic gene sets and an aging signature derived from bulk RNA-seq were similarly reduced. 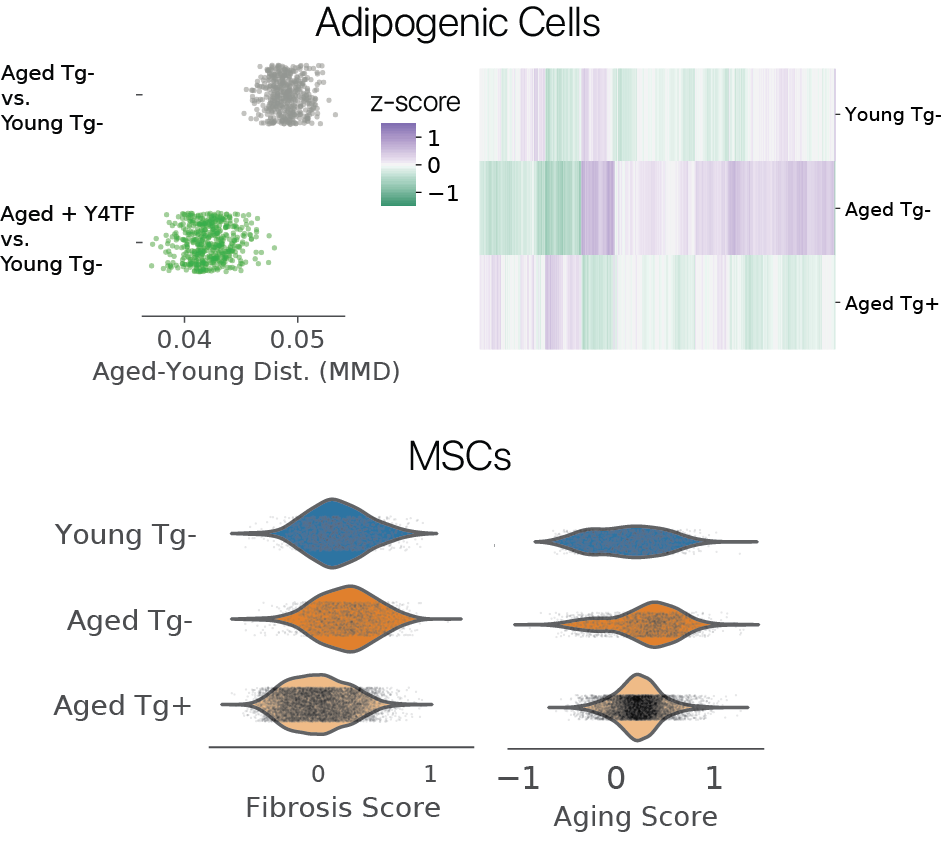 Reprogramming induced unique cell states, unseen in control conditions in both cell types. These unique states suggested to us that reprogramming might be suppressing somatic cell identity programs, despite some prior reports to the contrary. We performed pseudotime analysis to map each cell to a continuous coordinate system spanning the length of the reprogramming trajectories we observed. 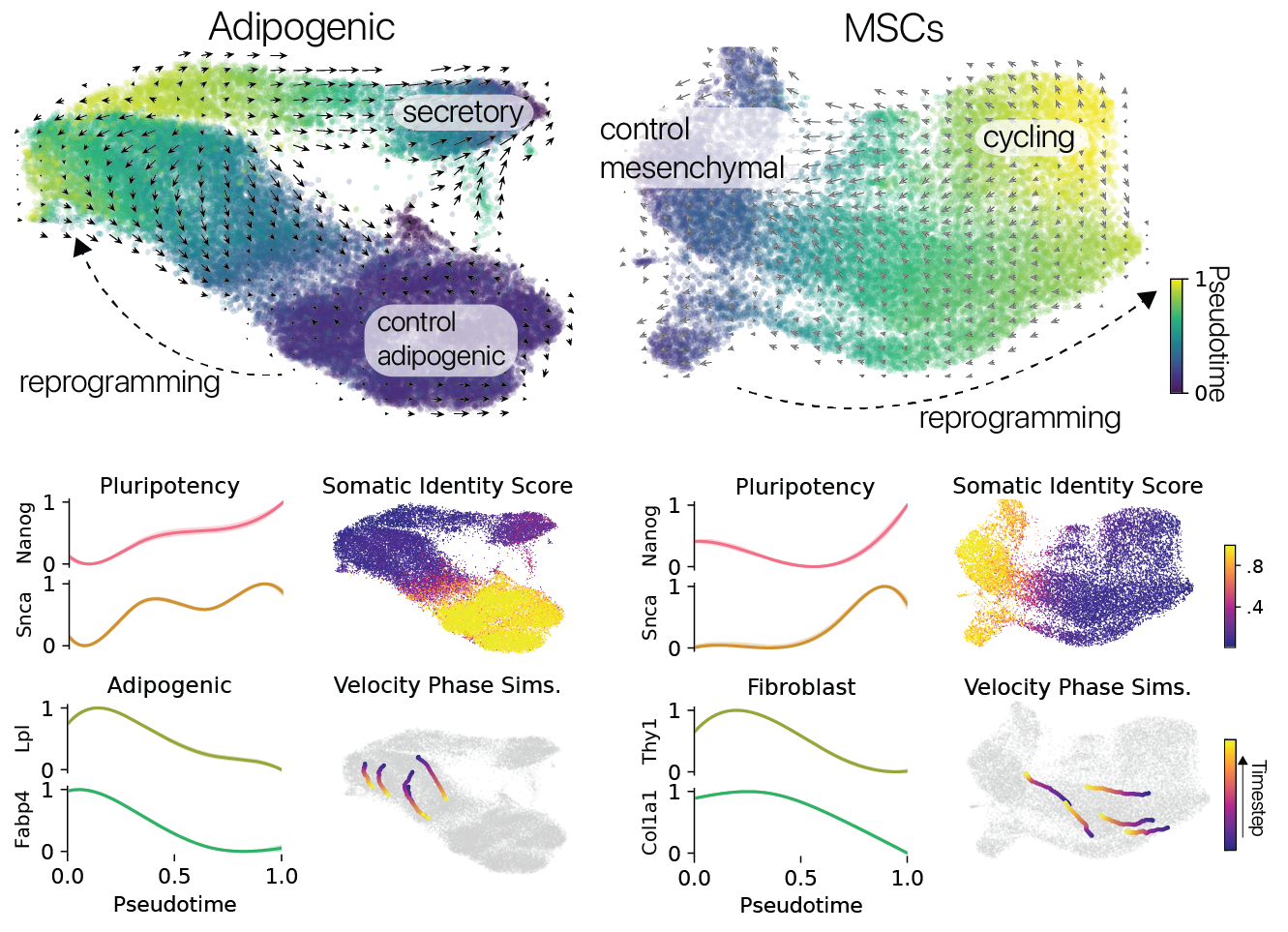 Pluripotent cells are characteristically neoplastic, forming teratomas in vivo. Our observation that Nanog is activated in a subset of transiently reprogrammed cells suggests that even transient activation of pluripotency programs poses a neoplastic risk. Given that we observed only a small Nanog+ cell population, it seems likely that previous reports using bulk measurements were not able to detect this rare cell state.

Are all four Yamanaka factors required to restore youthful expression? Are there any sufficient subsets? 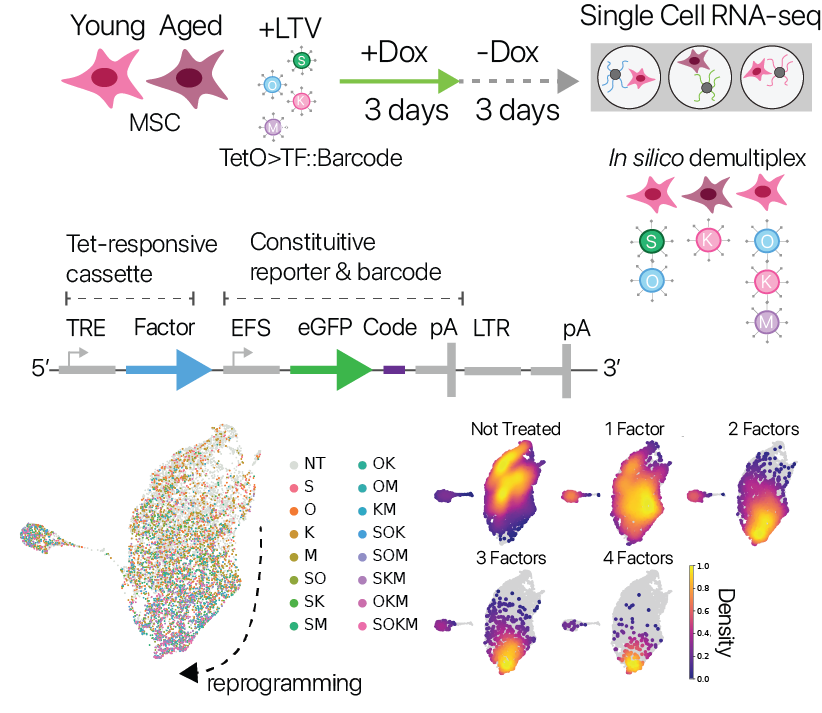 We next wondered if alternative reprogramming strategies could also restore youthful expression. The neoplastic risk posed by oncogenes in the Yamanaka Factor set (Klf4, Myc) motivates a search for alternative approaches. We also wondered if the suppression of cell identity we observed was intimately connected to rejuvenation, or if these two phenomena could be decoupled.

To investigate these questions, we developed a screening system that allowed us to perform transient reprogramming interventions in a pooled format with single cell RNA-seq as a read-out. Our approach was inspired by the CellTag lineage-tracing system (Biddy et. al. 2018), taking advantage of expressed barcodes in the 3’ UTR of a constituitive reporter. We used this system to test partial reprogramming in young and aged MSCs with all possible combinations of the Yamanaka factors.

We found that the transcriptional effects of transient reprogramming scaled with the number of unique factors delivered, consistent with known biology for the Yamanaka factors. To determine which combinations had unique effects, we trained a cell identity classification model (scNym) to discriminate different combinations based on transcriptional profiles. We found that effects from combinations of three factors were highly similar to the full Yamanaka factor set, suggesting no single factor is required rejuvenation.

Rejuvenation and identity suppression are not closely entangled

We also scored the expression of an aging gene signature and derived mesenchymal cell identity program scores using a cell classifier trained on a mouse cell atlas (Tabula Muris). We found that almost all combinations significantly reduced the expression of the aging signature, and all significantly suppressed mesenchymal identity. However, the degree of rejuvenation and identity suppression were not significantly correlated, suggesting these effects can be decoupled. The results of our screen suggest that the activation of the full pluripotency program is not required to suppress some features of aging. 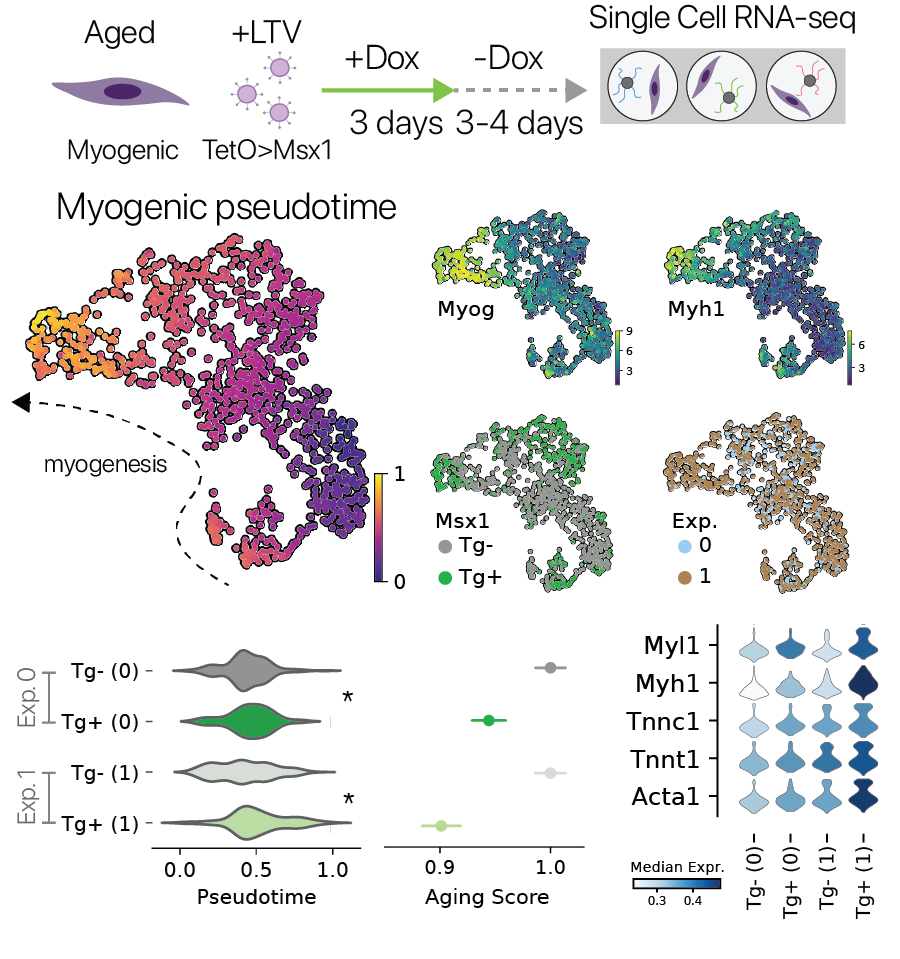 Urodele amphibians have the remarkable ability to regenerate limbs through an endogeneous dedifferentiation process. One key player in this process is the mesodermal transcription factor Msx1. Previous work has shown that Msx1 is sufficient to dedifferentiate synctial myotubes back into proliferating mononuclear progenitor cells, without inducing pluripotency.

We wondered if transient activation of this multipotency factor might also reverse features of aging in myogenic cells, similar to the Yamanaka factors (Sarkar et. al. 2020). We performed a transient pulse/chase of Msx1 followed by single cell RNA-seq in aged myogenic cells, similar to our other experiments. It has been reported that myogenic differentiation is impaired in aged myogenic cells, and here we found that transient Msx1 treatment improved myogenic gene expression in two independent experiments. This result suggests that transient activation of progenitor factors outside the core pluripotency program may also restore youthful gene expression, similar to the canonical Yamanaka factors.