Her-2 -- The Making of Herceptin

How are new medicine’s invented?

There are surprisingly few books that tell the story of world changing medicines. Biotechnology has improved the lives of countless patients in the past half-century, but you can’t appreciate that fact scanning the spines at your favorite bookstore. There are books about the early development of most popular websites (e.g. Facebook, Hatching Twitter, No Filter, In The Plex, The Everything Store, etc. etc.), and yet medicines that have cured intolerable diseases outright receive comparatively less attention in our popular canon 1.

It’s worth celebrating then the few stories of drug development that have been committed to text. The Billion Dollar Molecule and The Antidote by Barry Werth have long been my go-to example for how to tell these stories well. I’m pleased to add Robert Bazell’s Her-2: The Making of Herceptin to the list.

Her-2 recounts the development of Herceptin by Genentech and their academic partners. Herceptin was among the first “targeted” cancer therapies that function by specifically inhibiting cancer cell growth, rather than inhibiting the growth of all cells in the body like traditional chemotherapeutics. It’s difficult to understate the impact Herceptin has had on patient lives and the oncology drug development sphere writ large. Whereas it was once commonly accepted that “targeted antibody therapies don’t work for cancer,” monoclonal antibodies and targeted small molecules have now been developed for several cancer indications against a diverse set of targets 2. The success of Herceptin was a catalyzing event for this change in focus for the industry.

How does Herceptin work?

The mechanism-of-action that allows Herceptin to inhibit cancer growth is fairly easy to write on a napkin. Cells in the body proliferate in response to growth factor signals — often hormones or proteins circulating in the blood or permeating tissues. These factors are essential to allow for growth of the body during development. Genentech’s first marketed product was ironically human growth hormone 3.

In some breast and ovarian cancer cells, a receptor for epidermal growth factor encoded by the HER2 gene is expressed at much higher levels than in normal cells (overexpressed in the language of molecular biology). These cells get extra growth signals as a result of this abundant receptor, leading them to proliferate aberrantly. Herceptin is an antibody — a special protein produced by B cells of the immune system to bind to specific targets — that binds specifically to the HER2 receptor. By blocking these extra growth signals, Herceptin can limit the growth of some cancers, shrinking tumors and extending patient’s lives. 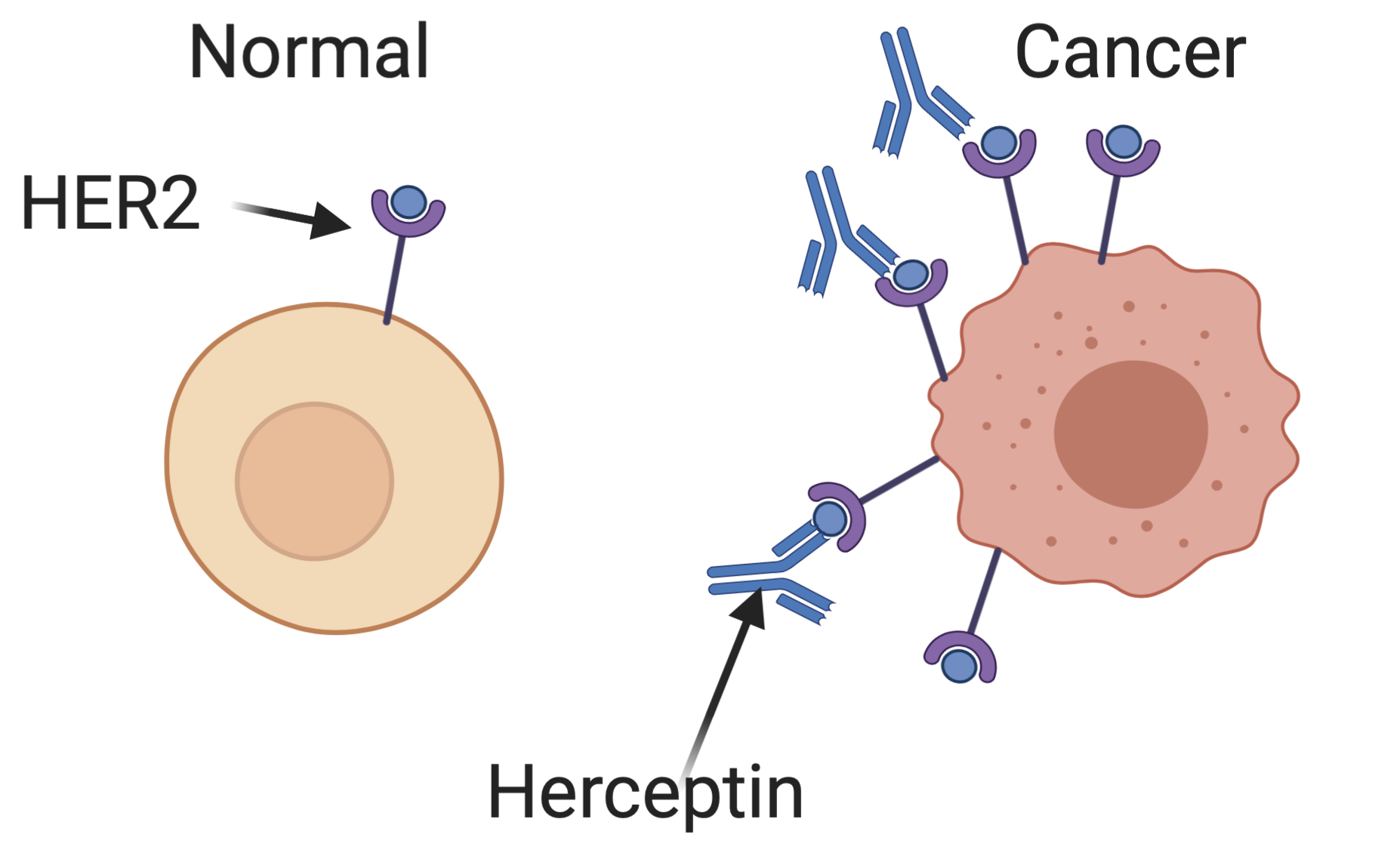 Bazzel does a remarkably good job of conveying this mechanism to a lay audience. Too often in biotechnology reporting, technical details are either overbearing or irresponsibly elided. Bazzel manages to strike the proper balance to leave a reader educated, without being bored.

How did we find this target?

The beginning of every drug development story is the identification of target. Target is a special word in drug development, denoting the molecular process you need to modify to treat a disease. For the majority of drugs, targets are specific proteins, and the modification is an inhibition of that protein’s activity.

Bazzel begins his story at this crucial stage — too often left out of historical accounts, even in the biotechnology industry press. The story is filled with classical scientific serendipity. The ortholog of HER2 was originally discovered as an oncogene (a gene that causes cancer when mutated in some way) in chickens and named erb-B.

Robert Weinberg’s team at MIT later discovered a rat ortholog through transfection experiments. His team induced neuro/glioblastomas in rat embryos by injecting a mutagen during development, then transferred DNA from resulting tumors into a set of non-cancerous cells to find genes that might be inducing cancerous growth. Across four separate tumors, they homed in on an oncogene that converted otherwise normal cells to cancerous growth. Based on a hunch, the team performed hybridization (base-pair level binding assays) to erb-B and observed that the rat and chicken genes had some level of shared sequence, known as homology. Perhaps the chicken oncogene had a mammalian ortholog! The original paper describing these experiments is worth a read 4.

Axel Ulrich had been the first person to clone the epidermal growth factor (EGF) itself. Famous for his role in cloning human insulin (see Invisible Frontiers: The Race to Synthesize a Human Gene), Ulrich was one of the first scientists at Genentech. Mike Watterfield had a hunch that erb-B was identical to the human EGF receptor gene. Since erb-B was known to cause cancer in chickens, this suggested that EGF receptors in humans might do the same thing!

Watterfield called Ulrich, a known master cloner, for help cloning the human EGF receptor gene to investigate this hypothesis. The collaboration was a profound success, resulting in the first clear connection between growth factor signaling and human cancers. The paper is also worth a read 5.

Ulrich used the sequence of the human EGF receptor to search for similar genes, and he pulled out HER2. He was able to show that HER2 was homologous to the neu gene named by Weinberg’s team. By sheer coincidence, Ulrich bumped into Dennis Slamon in the Denver Airport, an oncologist with an extensive collection of human tumors. The two struck up an agreement to search for Ulrich’s HER2 in Slamon’s samples to see if HER2 was driving human cancers. They struck upon samples with 30-fold upregulation of HER2 relative to normal cells — a clear hit 6.

These overexpression experiments sure suggested HER2 might play a role in cancers, but how can we know for sure? In a set of follow-up experiments, Ulrich and Slamon showed that HER2 overexpression was sufficient to induce cancers, and that blocking HER2 with an antibody in mice could shrink tumors. In drug development, these critical experiments are known as target validation — drawing the causal graph between nodes connected previously only by correlational edges.

From target to therapy

At this stage, Ulrich’s role at Genentech seems to present a natural path toward translating this discovery into a real medicine. Unfortunately, Genentech had recently made some ill-advised investments in using recombinant interferons as cancer treatments, and wanted to exit oncology altogether after the high profile failure of those programs. Within the company, the HER2 program struggled for resources. Ulrich eventually quit out of frustration.

Despite positive data using a monoclonal antibody to treat human tumors transplanted into mice, there was strong skepticism among senior Genentech management that antibodies would ever be successful for cancer treatment. The thinking at the time was that any protein targeted on a cancer cell would simply be downregulated — the cancer cells would mutate to avoid expressing the targeted protein. While not far-fetched, this thinking failed to appreciate the phenomenon of oncogene addiction, where tumor growth is dependent on a particular mutated gene. Some HER2 driven cancers can’t mutate away from their HER2+ state without severely reducing growth — exactly the reaction you want.

David Botstein and Art Levinson were able to see the promise in HER2 therapy when others were skeptical. Through their leadership, laboratory research continued on HER2 therapies, and additional executives were eventually convinced of the therapeutic potential for monoclonal antibodies in oncology. Their foresight was prescient 7.

In order for the mouse antibody to be used in humans, Genentech needed to remove as much of the mouse protein sequence as possible and replace it with human counterparts. The mouse sequence is recognized as foreign by the human body, and attacked by the immune system. The process of swapping out sections of the mouse antibody gene for human counterparts is known as “humanizing” an antibody, and is now standard practice. In the early days of Herceptin though, this was unproven territory and a risky bet. To his credit, Paul Carter at Genentech accomplished this task in only 10 months (!).

How do we know if the therapy works?

After the anti-HER2 antibody (anti-TargetName is a convention for antibody naming) was humanized, it needed to be tested in actual patients. Drug development proceeds through three stages in the USFDA system:

Phase I and II studies are conducted a bit differently in oncology, where drugs are often too toxic to be tested in healthy volunteers. Instead, cancer patients with no alternative treatment options receive experimental therapies as a last resort treatment. Genentech launched their trials in breast cancer patients based on the unmet medical need and high HER2 prevalence.

In the Phase I and II studies, some conducted by Ulrich’s early collaborator Slamon, a handful of patients saw remarkable responses to the drug. These patients had cancers that were recalcitrant to traditional chemotherapy, but nonetheless some with high HER2 expression saw drastic reductions in tumor size and became cancer free for long periods of time. Unlike traditional chemotherapies, Herceptin was largely free of notable side-effects when used alone, so these successful treatments could continue for months to years on end.

Despite these promising early results, the Phase III trials proved incredibly difficult. The Phase III scale is easily 10-100X the scale of Phase II in terms of patient numbers, with a commensurate increase in logistical burden and cost. For Genentech’s Phase III, they originally planned a placebo control arm of the trial that discouraged many patients from participating. Why sit through hours-long infusions of “antibody” if it might just be saline?

The trial struggled to enroll the necessary number of patients for almost a year. In that time, Art Levinson took over as CEO, and Genentech leadership took the risky-but-necessary step of dropping the placebo control arm to increase patient enrollment in the study. After this expensive near-death experience, the trial enrolled on schedule and eventually treated over 450 women. The trials unexpectedly finished early, despite the delays. This was due to the unfortunate discovery that HER2+ breast cancers have a more rapid progression than the general breast cancer population, so that the effects of the treatment were visible earlier than expected.

Those effects were overwhelmingly positive. Even in an arm of the trial that specifically treated patients with the worst, least treatable cancers, more than 10% of patients saw their tumors shrink by >50%. Another 30% of these patients saw their aggressive cancers half their growth, providing them with an average of 9 additional months with their loved ones.

In the larger trial in less serious patients, results were similarly positive. 49% of women saw their tumors decrease by >50% in size, while only 39% of women saw the same effect on standard chemotherapy alone. Added to a then-new microtubule inhibiting agent Taxol, Herceptin increased response rates from 16% to 40%.

Herceptin ignited the era of targeted cancer therapy, and encountered strong headwinds along the way.

Other drug development programs likely have complementary yet independent lessons to be extracted 8. I wish we had more of these stories to learn from.

Do you know of others captured in similar form? Send me an email — jacob@jkimmel.net or a Tweet @jacobkimmel.